Early on April 2, the industrial city Kremenchuk, in central Ukraine, got hit by bombs, damaging infrastructure and residential buildings.

The city lies along the Dnieper River where it is crossed by the Kharkiv-Kirovohrad railway. Because the city and the Kryukiv district across the river developed important metallurgical and engineering industries; products including steel castings, rolling stock, heavy trucks, and harvesters, one could imagine Russia wanting to undermine that industry. Iron ore historically has been mined in the vicinity, and oil from the river’s west-bank area has been refined.

Ukraine’s biggest oil refinery, Ukrtatnafta oil refinery, could also be found in Kremenchuk. The capacity of the plant, which was co-owned by the state and the oligarchs Ihor Kolomoisky and Oleksandr Yaroslavsky, was 18.6 million tons per year. But this year it was bombed on April 2-3 and Russians launched four missiles at the refinery on May 12, making that no activities shall be able to take place in 2022.

Of those targets you could say they were military of some importance, but what the Russians bombed on June 27 was of no military value whatsoever, and therefore can only be condemned as yet another gross violation of the rules of war, and should be added to the long list of war crimes already committed by the Russians. 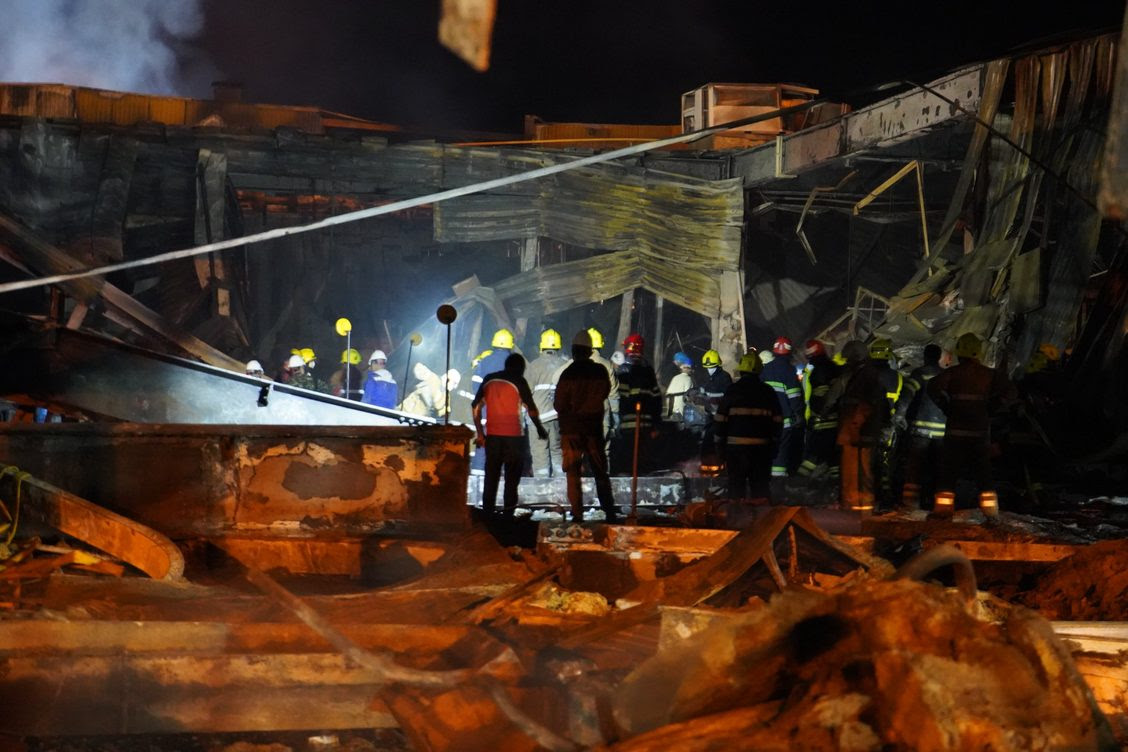 On May 27 it was normally the professional holiday for all emergency care workers.

These are people who are really indomitable, really brave, really committed to a good cause.

President Zelenksy had said earlier in the day.

Unfortunately, this war also took the lives of those who did everything to save others. Eternal memory to them!

And this is the minimum that the state can do to honor what they are doing.

At the same time in that peaceful city which serves as the administrative center of the Kremenchuk Raion (district) in Poltava Oblast (province), an ordinary shopping mall with women, children, ordinary civilians inside was targetted by the Russians. Before the air alarm there were about a thousand people. Sirens sounded between seven to 10 minutes before the X-22 cruise missile hit. Fortunately, many people managed to get out in time, but there was not time enough to get in safety and when the bombs struck there were still people inside: staff, some visitors…

Only totally insane terrorists, who should have no place on earth, can strike missiles at such an object. And this is not an off-target missile strike, this is a calculated Russian strike – exactly at this shopping mall.

Also in the past we could see that the time of strikes was often chosen to hit as many civilians as possible, and targets, were often just civilian buildings, living quarters, apartments and ordinary civilian houses around which there were no military camps at all. When we see the blaze that raged after the attack, one can only think that incendiary bombs were used, because ordinary bombs do not create such a fire. An incredible fire broke out in an area of more than 10 thousand square meters.

The mall attack is among the worst since Russia fired a cluster bomb at a crowded railway station in Kramatorsk on April 8, killing 59 and injuring 110, and came as remly to the European Union taking the first step toward Ukraine’s membership, and the U.S. approving additional military assistance.

The same day another brutal shelling of Kharkiv, northern Saltivka took place. At present, we know about 5 people killed and more than 30 wounded, 5 of them children. All are civilians, no military.

Up to know at least twenty people are found dead and at least 56 injured. Russian state-controlled media and authorities made a number of mutually contradictory claims about the attack that have been debunked. Their remark that it would have been a warehouse for weapons of war, makes no sense, as it would be too far away from the battlefield and would require an enormous amount of valuable time and travel, at a huge financial cost (for fuel price). But of course it is better to have foreign organisations checking this as well, to make sure that the Russians are once again wrong here and that they were intending an ordinary civilian target.

All those attacks on civilians should have the European and other world leaders to think and to make considerations to act. Zelensky said:

For sure to that there must come an end.

Addressing the leaders of the G7, the Ukrainian president said that their common potential is absolutely enough to defeat the Russian army

– it does not know how to fight. All the operations we carry out to deoccupy our territories show one thing: the occupiers are crumbling when we have something to put pressure on them. They do not know how to resist.
They are capable only of such vile strikes as those in Kremenchuk or Saltivka today, only of the total thoughtless destruction of all living things as in Mariupol. Therefore, the war may not drag on, if we can really push together and drive the occupiers out of our Ukrainian land. The sooner this happens, the more lives will be saved.

One can question how long the international community is going to allow those atrocities to continue. People in the Kremenchuk shopping mall deserved security just as much as people in any mall in the world – somewhere in Philadelphia or Tel Aviv, or in a shopping gallery somewhere in Dresden. Zelensky is convinced that the world can, and therefore must, stop Russian terror.

Ukraine must get reliable missile defense, we are expecting the supply of appropriate systems.

is the message send out again by the Ukrainian leader.

Yesterday June 28, the Russian army also struck with MLRS at a queue of people standing to get water. It was in the city of Lysychansk, Luhansk region. Ordinary people, civilians. None of them were military. Just a queue to get water. Eight people were killed, four women and a 15-year-old boy. And the oldest among the dead was 68 years old.

Kharkiv suffers brutal Russian strikes almost every day. Just yesterday 9 people were killed, 29 were wounded, 5 children among them. It was a Russian artillery strike at ordinary residential buildings.

The timing of the Russian attacks is also striking.

Today at 5 am the Russian army also carried out a strike at Mykolaiv and the city of Ochakiv, Mykolaiv region, killing a 6-year-old girl, a 76 years old man and a 50 years old woman. Among the wounded there is a baby, a boy of only 3 months old, he was born after the beginning of this full-scale Russian invasion, whose condition is very grave.

Two more missiles for today – at the city of Slovyansk, a city of oblast significance in Donetsk Oblast, eastern part of Ukraine. It is in the long-suffering Donbas, which Russia has been tormenting since 2014. Just a few hours before Zelensky’s address to the UN Security Council, two missiles hit the Odesa region. The city of Dnipro was also hit, and one of these missiles destroyed a car service station. Not some military station – the usual car service…