One day before in Belgium several thousand shall march to Brussels and shall provide chaos at Brussels Airport, the British made the same complaints as the Belgians.

For the British it is the same as for the Belgians and French, being confronted with higher bills for electricity, gas and gasoline or petrol. Those who have no public transport facilities saw their income reduced by the rise at the filling stations. At the moment in England as well as in Belgium we can see that there is fuel poverty going on.

Already, a few months of manipulating gas markets, have put pressure on the consumers who saw their energy bills go up high in the sky. Several people find themselves even impoverished by the bills they received at home.

It is nearly unbelievable that people have been struggling for a long time, without their government taking this seriously. For many, the cost of living far outweighs their income, and this current crisis really is just the icing on the cake.

Governments are not connected to their citizens at all and dare to ask for patience and understanding from those who have to go out for a full-time job with two, not even making the ends reach. Though for much too long lots of people did not see either how their governors mislead them and brought them to live under the cloud of privilege, tax evasion at the highest level, ignorance, unqualified and inexperienced ideologies.

For too long, ordinary workers have allowed themselves to be squeezed like lemons by big business. Ordinary middle-class people also allowed multinationals to be left untouched while they themselves have to pay sky-high taxes.

Over the years, an excessive imbalance has developed between the treatment of these multinationals and the local middle class, as well as of working people. The wealthier class was only too happy to escape government-imposed payments and was only too happy to take advantage of the new opportunities that the corona crisis brought with it and, by selling online, which made them even more profitable.

As European countries lose the supply of Russian fossil fuels, which will push up demand several companies make use of that Ukrainian crisis to raise their prices, though they have still enough supply. One might expect that the energy companies are seeking to provide a cushion for themselves against the future, and therefore charge their customers already some extra. But that extra is more than they need. Their excuse that they will need to pay dividends to their shareholders at the end of the year has no value, because the normal income at the normal prices would already have provided enough gains.

Governments like to hide the fact that they cannot give more to their staff and that they cannot invest more in schools because the pot is empty, even though there is a lot of money via the increased revenues from fuel prices (taxes and duties).

The head of the TUC, which has organised thousands of people to rally against the cost-of-living crisis, has warned the prime minister not to put responsibility for it on workers.

“Let me say this to Boris Johnson – don’t you dare shift the blame for inflation on to working people,”

“Don’t you dare, not after a decade of austerity, privatisation and pay cuts. Don’t you dare tell working families we have to put up with more pain.”

The TUC says workers have lost almost £20,000 since 2008 because pay has not kept pace with inflation.

Labour deputy leader Angela Rayner, serving as Shadow Chancellor of the Duchy of Lancaster, Shadow Minister for the Cabinet Office and Shadow Secretary of State for the Future of Work since 2021, has joined protests in London calling for action on the cost-of-living crisis. Ideologically identifying herself as a socialist and as being part of Labour’s soft left it was nice to see her also under the protesting people, though she may have breached COVID-19 regulations while campaigning during the run-up to the Hartlepool by-election and local elections last year. She Tweeted

Proud to march together to #DemandBetter 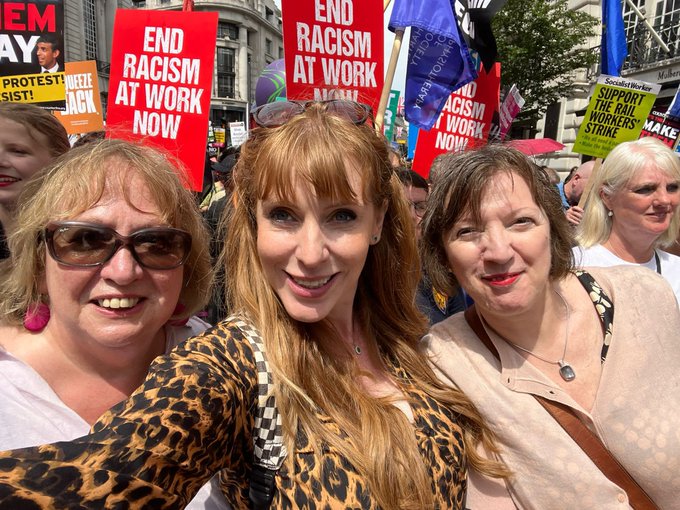 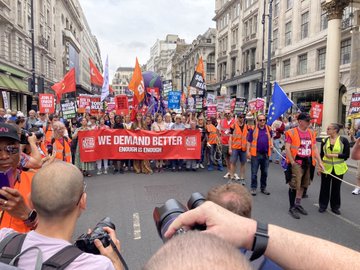 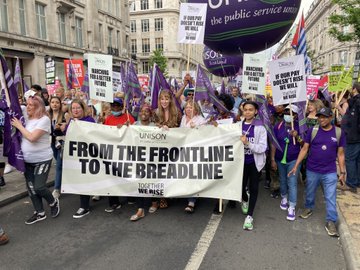 Andy Lewis, a teacher at a sixth-form college in Sunderland, was among those at the rally.

“Since Cameron and austerity, teachers have had a real-terms pay cut of £10,000,”

he said. {Thousands march in London over cost of living crisis}

“We now have teaching assistants ringing in saying that they can’t afford to come in. We’ve got admin staff saying we can’t afford the cost of transport to get in.

“My wife has a friend who is a headteacher, last week she had seven staff off because of the cost of living. It’s not just about getting a pay rise, it’s about the knock-on effect that this has on children.” {Thousands march in London over cost of living crisis}

Local government worker Niamh, 24, from Highbury, said she had decided to attend after seeing the impact of benefit cuts firsthand through her work. {Thousands march in London over cost of living crisis}

“I work in local government, where we have a lot of dealings with residents. We can see that demand for support has increased. But with reduced government funds, we’re left with very limited options to help people. {Thousands march in London over cost of living crisis}

“Our benefits system is broken. Really what we need is for benefits to increase, like housing allowance and the benefits cap. We’ve seen people with children who have just had a baby and say they don’t know how they’re going to be able to buy food and pay their rent. It’s very stark.”  {Thousands march in London over cost of living crisis}

In case the governments in West Europe are going to do nothing against the price rises, people are going to get more and more frustrated and angry.

The general remark we can hear from different platforms is:

If we don’t get pay rising across the economy, we will just keep lurching from crisis to crisis.