Religious people do believe that there is an Eternal Power Who has given some power to human beings to represent Him here on earth.

Power has a God-given role in human relationships and institutions, but as history has proven, it can lead to abuse when used in unhealthy ways. Throughout the ages, several people, who claimed to represent God or to be a bride of Christ, used their position to misuse youngsters, male and/or female. We can find several cases where those who presented themselves a the shepherds and leaders of the flock, misused their God-­given power, failed to care for wounded sheep, and allowed the flock of Israel to become prey.

We can only hope that God removed such flock from their care. In any case we know about hundreds of people who left the Catholic Church or some Protestant church where pastors were not afraid to cross the line of decency.

Psychologist Diane Langberg, PhD in “Redeeming Power”, Dr. Langberg according to the book, is giving those who of us who say we are Christ followers, another opportunity to examine ourselves.

Speaking into current #MeToo and #ChurchToo conversations, this book shows that the body of Christ desperately needs to understand the forms power takes, how it is abused, and how to respond to abuses of power.

Diane Langberg offers a clinical and theological framework for understanding how power operates, the effects of the abuse of power, and how power can be redeemed and restored to its proper God-given place in relationships and institutions.

She points at the danger people may come to, when some traumatic event happened in their life and when they want to talk about it, but get by the wrong person.

The more desperate people are, the more eager they will be for a champion to ride in on a white horse and make everything better. People in these circumstances are vulnerable to control and manipulation.

We must know that such damaged persons are often easy prey. And that is what happened in several churches, where priests regularly were considered the confidant to whom one could turn when one was not feeling well or when something serious had happened that one wanted to talk about and get answers about.

However, these confidants to whom one hoped to turn for good advice took matters into the wrong hands and cleverly exploited the weakened person to have them in their control and use them for their own pleasure. 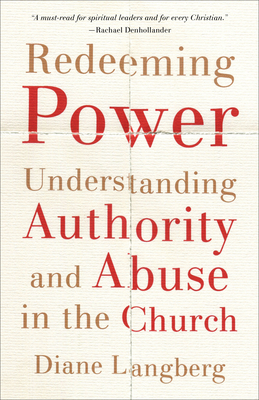 Mrs. Langberg’s book “Redeeming Power: Understanding Authority and Abuse in the Church” not only want to help Christian leaders identify and resist abusive systems but also want to show how they can use power to protect the vulnerable in their midst.

Lori Williams who is an American blogger at ourunseenhope.com, is a survivor of childhood trauma and abuse and religious abuse as an adult. She is passionate about mental health and recently completed a trauma informed coaching program through the International Association of Trauma Recovery Coaching. It is her desire to bring hope and awareness to spiritual trauma and abuse by sharing her personal healing journey through her writing.  In her review of Langberg’s book she writes:

It was an honor to be a part of this book launch team. I highly recommend Dr. Langberg’s book.

All of us have power, whether it be a mother nursing her newborn baby, the pastor of a big or small church, or a leader of an entire nation. In all of these situations, others look up to those who are in a higher position to provide for them what they really need. Throughout history, humans have chosen to bless or curse those who are vulnerable to them by serving themselves or serving others. With power comes great responsibility, and none of us really understand this power until we are faced with the choice of how to use it. In Redeeming Power, Dr. Langberg gives many examples of how power has been abused, the systems that enable it, and the desperation of our hearts that deceives us into believing that we are not abusing but doing good by protecting the broken systems of this world. She calls us to follow the One who had every opportunity to abuse power, because He had all the power, yet He chose to use His power to save us. I highly recommend this book for every person who wants to truly follow in Christ’s steps.

Although both writers err in attributing the Supreme Eternal Power to Jesus Christ, the son of God and not God Himself, the words may still be valid outside that context.

2 thoughts on “Redeeming Power: Understanding Authority and Abuse in the Church”