On the net my eye caught some writings where Sancta Claus (or Santa Claus) was compared to God.

Some people also write that ‘He’ has a naughty and nice list.

We think of God a lot like we think of Santa Claus. Will we make it to His nice list? Our hope is that we will have done enough good so that we get to Heaven.

For many who take Jesus to be God who came onto the earth on the 25th of December those who do not behave shall miss the nice list, but because of Jesus we can be forgiven.

Jeshua, the son of Mary and Joseph from the tribe of David got to be known as Jesus. When he came onto the earth on the 17th of October -4 nobody would have thought this baby born in a humble environment would be a world star.

About him we could use the opening line Once Upon A Time. We have this tendency to want to put the Christmas story into the Once Upon A Time genre. As a parent or grandparent tells the story to a child, “Once upon a time there was a girl called Mary.” That’s not how the story begins.

As in other stories (of my favourite writers) there could be written: “It was the best of times, it was the worst of times…”

For some the family tree the apostle Matthew gives on the human side for Jesus is comparable to the First Christmas Tree. They do forget that in earlier times the pinetree was, as in certain traditions today, a universal symbol of life and fertility.

The pine-tree is associated with the  early Romans decorations with little masks of Bacchus the Greek fertility god  and with the mother-goddess Cybele. Like all evergreen trees which do not lose their leaves or green colour during the wintertime, the pine tree stands for immortality, resiliency, longevity, and rebirth.
The pine’s strength in the face of adversity makes it symbolic of those who have become strong through suffering, or who have kept to their beliefs and promises in spite of opposition.

In Scandinavia, a myth of enduring love surrounds a certain pine. It is said that this tree grew from the blood of two lovers who had been wrongfully executed in the forest. During the Christmas season, strange lights can be seen shining in its branches as a testimony of their innocence and love.

In Japan, the pine tree stands as a tribute to strong character and energy because it holds up against strong winds. Taoists once believed that if a pine’s resin was allowed to flow down its trunk and onto the earth, a fu-lin or mushroom of immortality would grow from it in 1000 years. Eating the fu-lin would give a person eternal youth.

The Tree of Life and the Tree of Knowledge from the Garden of Eden were blended together in many customs and legends about the fir tree. Adam and Eve Day was celebrated on December 24th. During the Middle Ages it was customary to perform Paradise Plays on the Church grounds on this holiday, like they still do in many villages. Parents seem to adore their children playing in those Christmas plays. A single fir tree strung with apples was used to symbolize both of the garden’s trees.

The priests and priestesses at the service for Cybele were castrated and inaugurated under the pine tree. The ecstasies with the dervish-like behaviour of the priests and devotees of the “great goddess” were taken into the Catholic Church by the convert Montanus who also made the mother of Christ into the mother godess Cybele. As mother god therefore Jesus had to become god as well. For those opposing the non-trinitarian believers at that time, this was a good opposition to further the idea of the Trinity. Certainly, because Montanus was of the opinion that the Holy Spirit was soon to return to the earth and would be the person to be the master of the New Jerusalem.

Montanus considered himself to be the Paraclete.

The Paraclete ordered a few fasts and abstinences; the latter were strict xerophagioe, but only for two weeks in the year, and even then the Saturdays and Sundays did not count (Tertullian, \”De jej.\”, xv). Not only was virginity strongly recommended (as always by the Church), but second marriages were disapproved. Chastity was declared by Priscilla to be a preparation for ecstasy:

“The holy [chaste] minister knows how to minister holiness. For those who purify their hearts [reading purificantes enim corda, by conjecture for purificantia enim concordal] both see visions, and placing their head downwards (!) also hear manifest voices, as saving as they are secret” (Tertullian, \”Exhort.\” X, in one manuscript).

Gifts were accepted, under the guise of offerings, and today this tradition keeps on in the giving gifts at Christmas. The decorations taken into the temples were liked by Pope Damus I who is celebrated in Catholic churches on the 11th of December. When you look at the statues and many paintings of 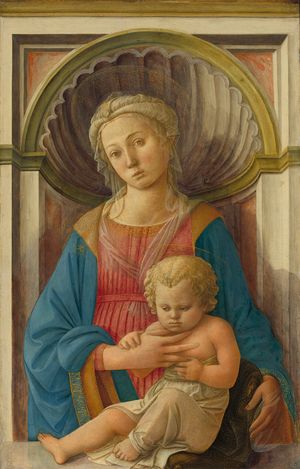 Mary and the child Jesus you can clearly see the same composition as the goddess Cybele or Isis with child Horus.
Those heathen gods where taken into the gnostic teachings.

Now earth, say the Greeks, gave forth a man, (earth) first bearing a goodly gift, wishing to become mother not of plants devoid of sense, nor beasts without reason, but of a gentle and highly favoured creature.

The Jesus of the apostles now became a man from the beginning of the world and an incarnation of the God Creator. In order, therefore, that finally the Great Man from above may be overpowered, from whom, as they say, the whole family named on earth and in the heavens has been formed, to him was given also a soul, that through the soul he might suffer; and that the enslaved image may be punished of the Great and most Glorious and Perfect Man, for even so they call him.

The god-son and god-mother had be born and it took only a few steps to bring them honour on the birthday of the goddess of light, on the 25th of December.

The Perfect Man Called Papa By the Phrygians was to be worshipped as a god. Homer was considered as one of their prophets and made the following assertion:

“he who says that all things derive consistence from one, is in error; but he who says that they are of three, is in possession of the truth, and will furnish a solution of the (phonomena of the) universe. For there is, says (the Naassene), one blessed nature of the Blessed Man, of him who is above, (namely) Adam; and there is one mortal nature, that which is below; and there is one kingless generation, which is begotten above, where, he says, is Mariam the sought-for one, and Iothor the mighty sage, and Sephora the gazing one, and Moses whose generation is not in Egypt, for children were born unto him in Madian; and not even this, he says, has escaped the notice of the poets. Threefold was our partition; each obtained His meed of honour due.”

The way was further paved to bring the Trinity and worshipping of statues and artefacts of anathemata (dedicatory gifts offered to gods) into the church.

Though the Christmas tree as we know it today found its ‘rebirth’  in the 16th century in Germany and only became more popular out of that country in later years.

The Sancta Claus also known as Saint Nicholas, Father Christmas and simply “Santa”, came into existence in the 19th century coming from the tradition from Holland, Belgium and Northern France of Sinterklaas or Sint Nicholaas (Saint Nicholas), “De Goedheiligman” (The Good Holy Man). Parallels have been drawn between the legend of Sinterklaas and the figure of Odin, a major god among the Germanic peoples, who was worshipped in North and Western Europe prior to Christianisation. This figure found its origin in the pagan customs where Odin rides the sky with his gray horse Sleipnir.

The “pakjesavond” or “evening of presents” became a very appreciated moment to be together with the family.

It is often claimed that during the American War of Independence, the inhabitants of New York City, a former Dutch colonial town (New Amsterdam), reinvented their Sinterklaas tradition, as Saint Nicholas was a symbol of the city’s non-English past. The name Santa Claus supposedly derived from older Dutch and Flemish Sinter Klaas.

To compare this Sancta with the gift God gave to the world, or with that giver himself is total blasphemy. Jesus is really a gift which is precious and we should all praise. But he was a man of flesh and blood who gave his life for the sin of all, so that his Father would accept them as His children again.

In case you would like to look at Christ Jesus as the Light that came unto us, be careful not to mix the heathen symbols and traditions in your actions and give each of the figures involved in this factual story their right place. Do not make it to some fictional fantasy and presentation of political cartoonist Thomas Nast with a rotund, cheerful man with a full, white beard, his bright red suit trimmed with white fur, North Pole workshop, elves, holding a sack laden with toys for lucky children.

Coming back to the opening lines of storybooks we may take these days Matthew his gospel, which starts by establishing the legal right to Jesus as the promised Messiah. If it’s surprising to start a book with a list of names, it’s even more surprising with the particular names chosen. They just are not what you would expect as an introduction to such an important figure who is by many considered to be God. But this family tree shows the family tree of the promised one, indicating that Jesus started life on this earth about two millennia ago.

Let us remember that and accept Jesus, the fulfiller of the New Covenant, for whom he really is: the son of God given to the world to bring us closer to his and our Father, the Only One God of gods, the Elohim Jehovah, our strength. Today Jesus is our mediator between His Father, God and us, which is a marvellous present for which we should be thankful to God the Most High.We can only hope that we shall be surprised by joy and be gathered with this Jesus to enter the Kingdom of God.

3 thoughts on “Sancta Claus is not God”